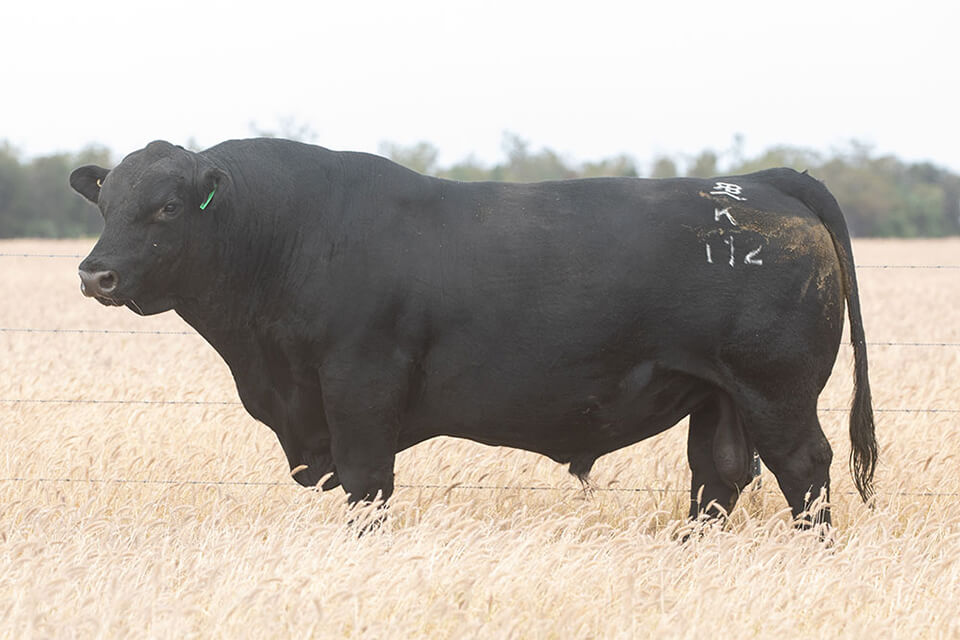 View EBVs
In 2016 we were looking for a bull that would cover off on as many characteristics as we could, with a few non-negotiables like fertility, scrotal size and muscle expression with softness. Out of all the cow herds in Australia, we knew the Glenoch herd as well as anyone, and knew the cows were well adapted to our environment. We selected K112 prior to the sale and were fortunate to be able to purchase him at auction. Read more > Expand

To look at him now he certainly has a lot of presence at every angle. He’s a bull that improves every cow he’s joined to and we feel his daughters will certainly be a platform for our breeding herd in years to come. K112 has fantastic feet structure with little to no claw curl in all four feet and plenty of heel. He steps correctly and is very quiet like a lot of A241 progeny.

The cowline of this bull has a number of cows that are well proven for longevity. His mother has since been sold to Merribrook Angus, Vic. She shows a lot of capacity, and for Glenoch she had five calves for an average calving interval (ACI) of 371 days.

More impressive is the longevity of the three cows behind her. B133 is still active in the Glenoch herd, having had 11 calves for a 373 ACI. Her sire was a Glenoch bred bull whose sons sold very well, and he goes back to one of the great ones, L38, who Dunoon Angus later purchased and flushed from.

The dam of B133, Q17, also produced 11 calves for a 376 ACI and she was also the mother to V13 and W51, whose sons sold very well. Both these cows were purchased by Burenda Angus and Barr G Angus.

The dam of Q17 is F4, who was born in 1986 and was one of the earlier cows remembered by Justin. For Glenoch she had 10 calves, an ACI of 370 days and was later purchased and flushed by DSK Angus. Interestingly, of the 10 calves she had for Glenoch, nine of them were females, seven of which were later sold as breeding cows to seedstock herds Willalooka, Bunya Creek, Valorbrook and Diamond Ridge.

K112’s sire and maternal grandsire need no introduction, having had 7625 and 7120 progeny analysed through Breedplan. It’s his cowline that makes K112 that bit more special, with so many cows that are not only proven for fertility but that have bred on to produce great ones. Like most bulls, there is generally a compromise as his birth weight is quite high, but it’s hard to fault him elsewhere. View EBVs
Hinman is very structurally correct, quiet, with moderate birth and his progeny grow quickly. He now has close to 200 progeny recorded, and his IMF and carcase weight EBVs are in the top 1% of the Angus breed. Read more > Expand

Hinman's sons have sold well over the last few years. He has a beautiful slick skin type, very correct feet, with calving ease, a great temperament, high marbling and his progeny are quick to grow.

A few years ago Hinman was entered into Cohort 7 of the Angus Sire Benchmarking Program. His progeny from this program have had data recorded since birth, and have added increased accuracy right across his EBVs. Currently, the steers are in the feedlot, and we eagerly await their carcase data.

Hinman continues to reside in a commercial operation for John and Guy Campbell around the Condamine and Glenmorgan districts, and at seven years old is proving himself for longevity.

His mother D80 has proven herself for fertility, with nine calves and an average calving interval of 367 days, and she also produced a top calf every time. She always calved in the first 1-2 weeks of our calving period since her first as a two year old. View EBVs
M602 has been a standout since he was a young calf. He exhibits all the proven characteristics of his maternal grand sire, Glenoch Hinman H221. Beautiful skin type, fast growth, balanced at every angle, fantastic temperament, and he goes further to add extra softness and scrotal size. Read more > Expand

His pedigree is first class, and in particular his maternal pedigree. K615, F606, C102 are magnificent looking cows, who always calve early. The maternal granddam of C102 is Wattletop Ann P55. Lock Rogers rates this GT Maximum cow as one of his best, having produced 63 progeny and grossing around $170,000 in bull sales.

They have since sold a 50% physical share to Mandayen Angus for $20,000. He is now one of Australia's highest rated Angus sires for semen sales, and is marketed globally by Agri-Gene.

View EBVs
When we saw F707 pictured in a sale catalogue in 2012, we immediately thought this bull has something extra to him. Fortunately, we were able to purchase him and he’s been a solid platform for our Brangus herd. Read more > Expand

F707 is 100% USA genetics, and has almost 200 progeny analysed through Breedplan.

His calves are fast growing, he is one of the top proven bulls for Eye Muscle Area and is top 10% for scrotal size.

F707 is still active, approaching his eighth joining season, and he is a real cow-getter. 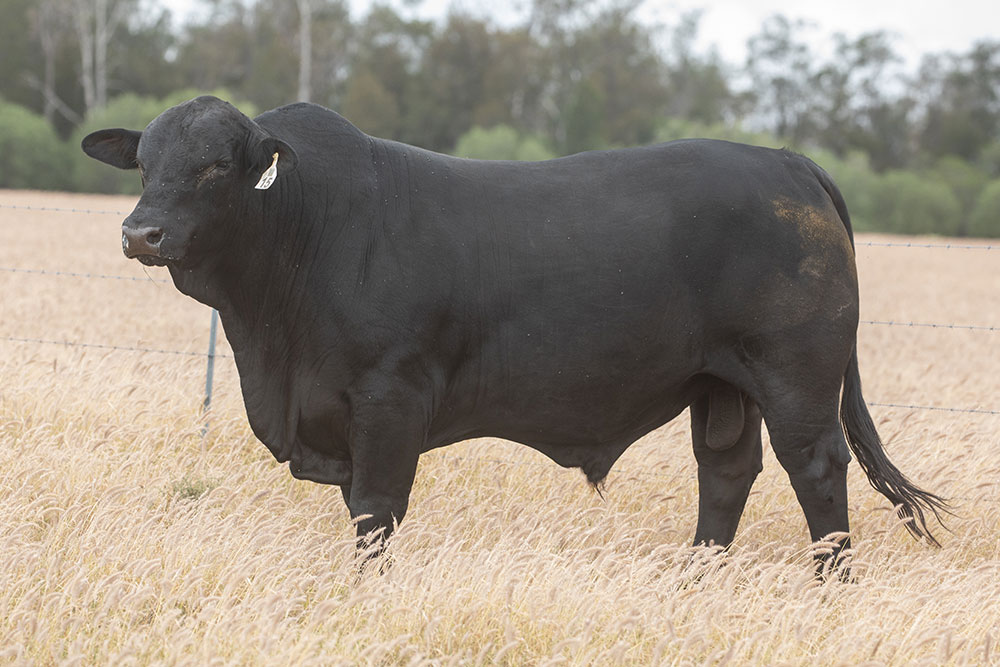 View EBVs
L594 is now a proven calving ease sire with a clean underline, fantastic foot structure and is very quiet. He is an ET calf out of one of Triple B’s best cows, B217, who has 19 progeny analysed through Breedplan. Read more > Expand

L594 is by USA sire Suhn’s Next Step, who is also a proven calving ease sire with 75 progeny analysed through Breedplan.